Hulu Plus for Windows 10 (Windows)

Description - Hulu Plus for Windows 10 (Windows)


Hulu is a free Windows app that is available in the USA and United States territories, which provides Video on Demand and allows you to stream television shows via your mobile or tablet. They can then be viewed on that device or on a television set by using Chromecast, on an Xbox One or on a Playstation 3 or Playstation 4. While the app is free to download, users will need to pay a monthly service charge to access the complete catalogue of shows and get content with maximum HD resolution. There are over 100,000 television episodes available to stream from hundreds of providers, including NBC, CBS, Showtime and Fox. Thousands of full seasons can be accessed, as well as single episodes. Many current, popular shows are available as soon as a day after their first airing, while the app lets you catch up with complete seasons of classic shows, such as Seinfeld, American Horror Story or CSI. There is an in-app remote control with a panel-type interface and the app gives the ability to resume watching from where you left off. It also allows you to add favourite shows to a Watchlist where they can instantly accessed and shared. Hulu has a huge range of children’s shows, including Spongebob Squarepants, Hey Arnold! and Sesame Street. It features a Kids Lock that makes it easy to restrict viewing so that only shows on the Kids Hub can be watched. There is also a wide range of specialised programming, such as Latino and telenovella series, and there are many Hulu Original series offering unique shows that can’t be found elsewhere. Viewers can choose to view with no commercials at all or with limited commercials. Plans start at $7.99/month, while SHOWTIME® is available for an additional $8.99/month. The app includes third party software, including digital measurement to gather statistics for Nielsen’s TV ratings. The service is supported on Windows 10 and Windows 8.1 devices and is a great way to keep up with all your favourite TV shows.
​ 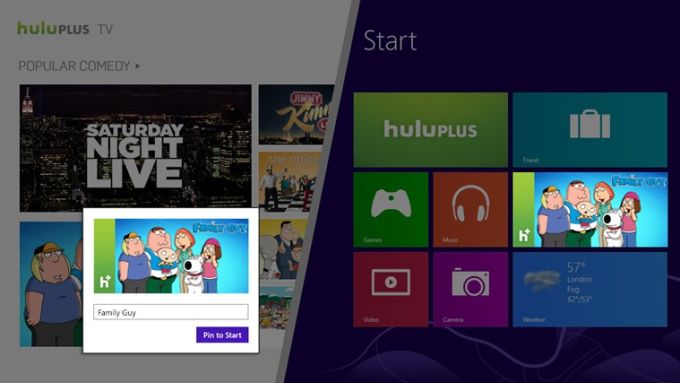 More in -Hulu Plus for Windows 10 (Windows)