CrimeCraft GangWars is a massively multiplayer FPS (first person shooter) offering you the chance to join or create a gang to face other mafia clans and conquer the turf. Numerous game modes are available, and CrimeCraft GangWars is heavily weighted towards crafting and customizing your equipment. A rich multiplayer game  CrimeCraft GangWars is a rich game that offers many different game modes. The only mode available at the beginning is "team deathmatch", but you can quickly choose others to climb through the levels. The number of different weapons is really impressive, not to mention the customization options for your avatar. The most experienced gamers will enjoy the features offered by CrimeCraft GangWars. Keeping a gang going, expanding your turf on the world map and crafting the best equipment... there are hours of fun to be had! An immediate start for action fans CrimeCraft GangWars adopts the normal control system in first person shooter games. However, the opportunity for players to switch between first person views and third person views is a great feature - though it depends what you like, obviously. The game handles really well and even though there's no built-in beginner's guide, most players should feel right at home. Good 3D graphics but animations could be better The technical aspect of CrimeCraft GangWars may seem pretty decent at first glance; the environments and 3D models look just right. And for a free game, it`s pretty good. It's also unfortunately offset by a few shortcomings, however. The character animations are stiff and reduce any pleasure you might have controling your avatar. The weapons are pretty weak and shooting doesn't feel very realistic...which is a shame for a mainly combat-based game. CrimeCraft GangWars is generally quite fluid but gamers might experience a bit of stalling, especially when a player uses a smoke grenade. A great multiplayer FPS Although there a few (regrettable) technical shortcomings, CrimeCraft GangWars is an excellent multiplayer shooting game that will definitely keep you in suspense. It's worth noting though that as the game is free, regular players will probably find themselves spending money to progress more quickly.

Cons:
"Weapons are weak"
"The animation"
​ 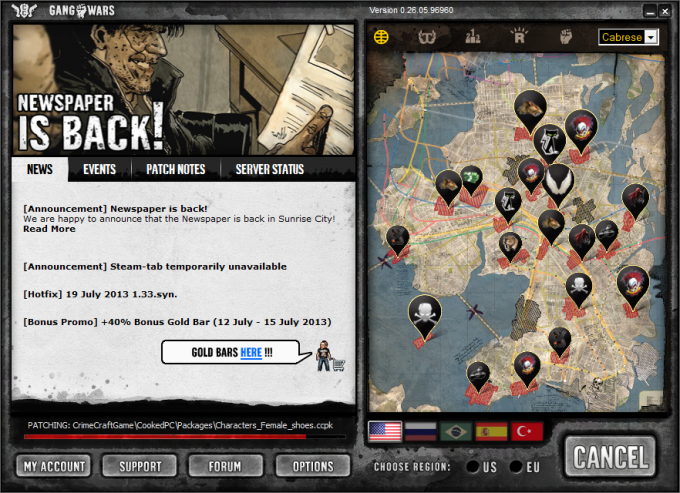